History
The Marine Corp 1st Reconnaissance Battalion has been led by Lieutenant Colonel Michael Mooney since February 2008. The impressive lineage for the 1st Recon Battalion dates back to 1937 where they were deployed to Guantanamo Bay, Cuba. This division also experienced a hard fought victory there as well during WW II.

1950 - 1964
From 1950 to 1964, the Battalion also participated in the Korean War operating from various points on the globe. They relocated during March 1955 to Camp Pendleton and participated in the Cuban Missile Crisis from November to December 1962.

1965 - 1971
They again deployed in September 1965 to Camp Schwab, Okinawa and to the Republic of South Vietnam during 1966. They participated in the war in Vietnam from March 1966 to March 1971 and again returned to Camp Pendleton during the spring of 1971.
Recognition
The Battalion has received numerous awards and recognition for their service to our country, including: 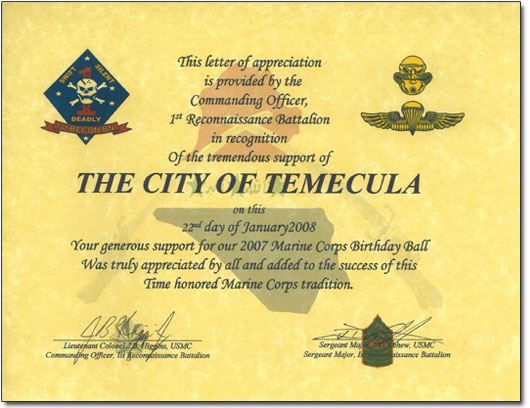 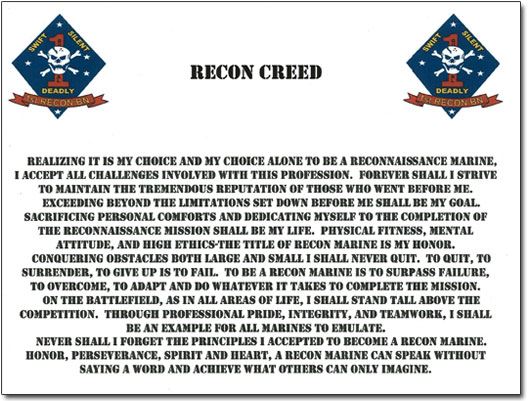 By adopting a specific battalion, the City of Temecula forges an official relationship with members of this division and enters into a professional partnership for City special events, color guard ceremonies, and other official functions such as the Mayor’s State of the City Address.

TEMECULA ­ When Temecula needs a color guard at special events and city functions, the 1st Reconnaissance Battalion of the 1st Marine Division will be at its service. Temecula gained a posse of 530 Marines earlier this week when the City Council unanimously "adopted" the battalion during its Tuesday meeting.

By accepting the city's offer, the battalion, which is based at Camp Pendleton, and the city can forge an official relationship. Temecula City Councilman Chuck Washington requested the council consider the move as a way to serve both the Marines and the people of Temecula.  "These Marines want to be connected to somebody and having an official status with the city gives them a sense of home," Washington said. "I feel, especially with our enlisted folks, that we need to look out for them. A lot of them are displaced from where they grew up, far from family. Some of them are all the way across the country.  This could make them feel a part of a new extended family."

The adoption of military units by cities, even schools, is not uncommon. However, this particular battalion had not previously been invited to create a partnership with another entity.

Sgt. Major Alan Miller, of the 1st Reconnaissance Battalion, said the division is pleased to be welcomed to Temecula.  "We were just extended the invitation that they wanted to adopt us and we accepted," Miller said, "We didn't have a local area that had adopted us. They offered, so we accepted."

Miller said the residents of Temecula will benefit by having the battalion for any type of color guard, for any need of a platoon of Marines or other events. "As long as were are here, we would try to provide it," he said.

Adopting the battalion will not cost the city anything.

Miller said there is something the residents could provide the Marines, though: cards and letters. Currently, the 1st Reconnaissance Battalion is in predeployment training. Miller anticipates the unit will be deployed to Iraq in March.

"The main thing this city can do for us is send the occasional card or letter," Miller said. "I can't tell you what it means to receive something from home."

In operations, the battalion specializes in reconnaissance and surveillance.

"Typically, we would be dropped behind enemy lines or we would go in front of the 1st Marine division and would report on the roads, survey the water, survey the beach, look for mine fields and possible landing fields," Miller said.

Lt. Col. Bau Higgins has led the 1st Reconnaissance Battalion and its 530 Marines since July 31, said Miller. The 1st Reconnaissance Battalion dates back to 1937 when it was deployed to Guantanamo Bay, Cuba. From 1950 to 1964, the battalion participated in the Korean War operating from various points on the globe. The battalion relocated in March 1955 to Camp Pendleton and took part in operations during the Cuban missile crisis of 1962.

The battalion was again deployed in September 1965 to Okinawa and to the Republic of South Vietnam in 1966. It participated in the war in Vietnam from March 1966 to 1971, returning to Camp Pendleton in spring 1971. The battalion has received numerous awards and recognition for its service.