History
The USS Ronald Reagan was built by Northrop Grumman Newport News in Newport News, Virginia, the only company in the United States with the unique ability to build nuclear powered aircraft carriers.

Statistics
Ronald Reagan is the 9th Nimitz class aircraft carrier. Being nuclear powered, it can operate for more than 20 years without refueling and is designed to meet the needs of the Navy and our country for 50 years. 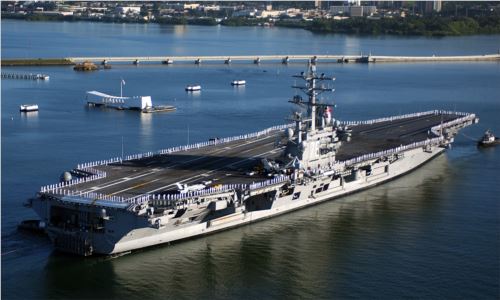 Official Citizens
“In addition to naming today as ‘USS Ronald Reagan Day,’ I would like to also proclaim, on behalf of the city, that all Ronald Reagan Sailors are officially Temecula citizens,” said Mayor Comerchero in a statement following the initial announcement.
Contact City Staff
City Employment
Agendas
Quality of Life Master Plan
Ch3 and Live Meetings