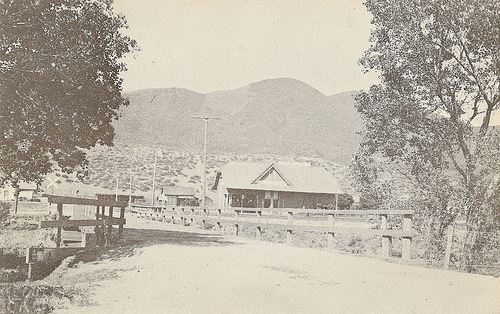 The railroad was late in coming to Temecula. In the 1880s, Temecula was still a quiet village of farmers and ranchers. Louis Wolf ran a successful store at the bank of the Temecula Creek. The giant Ranchos that had been deeded by the former Mexican government had been divided, sold, and divided again. Land speculators seeking to certify their purchases had to make the trek to the count seat in the city of San Diego, which required, at a minimum, a two-day journey by horseback or wagon. But in San Diego, the leaders of this sleepy coastal town had been struggling to bring train service into their town, with the hopes of making it the western terminus of a continental line. It was hoped that San Diego Bay would be the main stop for the transfer of goods arriving from Europe, China and Japan. Railroad service would provide the link to ship these goods to all parts of the country, transforming San Diego into a successful center of trade.
The City of Temecula's Railroad Set
But previous attempts at securing a railroad line into San Diego had failed, mainly due to the opposition of the mighty Southern Pacific Railroad, owned by the “Big Four”: Leland Stanford, Charles Crocker, Collis P. Huntington, and Mark Hopkins. These powerful men maintained a monopoly on train and shipping services on the west coast. Having failed in negotiations with the "Big Four", the San Diego leaders instead made a deal to connect with the Santa Fe Company, which was looking to break the monopoly.

On October 13, 1880, the California Southern Railroad Company was chartered. Their goal was to build a line from National City, just south of San Diego, up to what is now Oceanside, and then to follow the Santa Margarita River to Fallbrook, and then northward through the Temecula canyon. Stops would include Temecula, Perris, Lake Elsinore, and finally Colton, where it would eventually meet the line coming from the East.

Construction began immediately with surveying and laying of track proceeding at a rate of ¾ mile of line a day. Serious delays were encountered in the Temecula Canyon, where shear cliffs of granite had to be blasted and dirt hauled away. A crew totaling 2,000 at one point worked on laying track through the eight-mile stretch of canyon, crossing and re-crossing the Santa Margarita creek several times. Surveyors were warned by local residents that rainstorms would swell the creek, and potentially wash away the tracks, but the railroad engineers ignored their warnings and proceeded to build the track on elevated banks close to the creek’s edges.

By May of 1882, the track was complete to Colton. On August 21, 1882 the first train departed National City and arrived in Colton, inaugurating the Southern California Railroad line. Fare was $6 one-way or $9 round-trip. Passengers remarked on the stark beauty of the Temecula canyon, and the newspapers boasted that seeing it was alone worth the price of a ticket.

But the winter of 1883-1884 proved to be one of the wettest on record for Southern California. Rainstorms in February brought tremendous downpours, the result of the Krakatoa volcanic explosion half-way around the world, which spewed so much ash into the skies as to alter weather patterns all around the globe. Fallbrook experienced over 20 inches of rainfall, resulting in a total washout of the tracks through the Temecula canyon. The California Southern Railroad suspended rail service to Temecula, and the effect on the company’s finances put them on the brink of bankruptcy. But the Atchison, Topeka, and Santa Fe railroad stepped in, providing enough capital to repair the link between Fallbrook and Temecula. Several hundred laborers, including Chinese, quickly set about repairing the line, which was re-opened less than a year later on January 12, 1885.

Rail service continued but the leaders of the Santa Fe Company had lost faith in the viability of an inland route. By 1888, the company completed the “surf line”, connecting Oceanside to what is now Orange County, which provided a desired link to the prosperous trade center of Los Angeles. Santa Fe began moving their offices to San Bernardino, with the view of focusing their operations on the Los Angeles market.

Frequent washouts and another disastrous storm in 1891 sealed the fate of the Temecula line. Santa Fe ceased operations to San Diego on January, 1892. Service continued from Temecula to Colton for the next 40 years, with train service ending for good in 1935.
Contact City Staff
City Employment
Homeless Outreach
Agendas
Permit Center