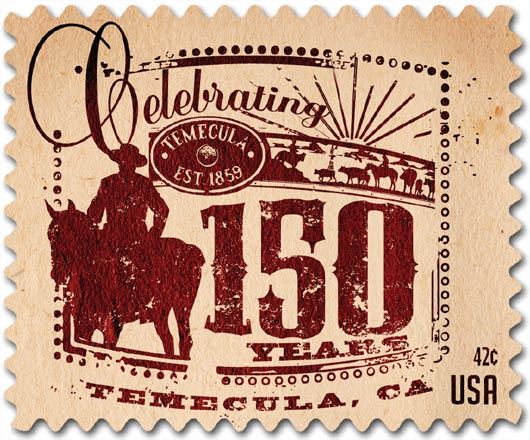 This year, 2009, marks the 150th Anniversary of the very first Post Office in Temecula. With its establishment it became one of only seven post offices in California south of the Tehachapi Mountains. Having a designated Post Office implies a certain permanency and importance to the area served and in 1859 Temecula’s postal designation marked it as a verdant and pleasant valley that would, in time, trace significant history and growth. 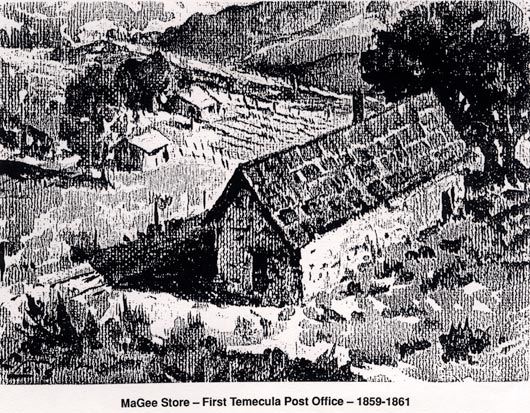 The process of obtaining a post office began in Philadelphia in 1775 with the session of the 2nd Continental Congress. At that meeting the Post Office Department, the second oldest Federal agency, had its origin. Benjamin Franklin was designated as the first Postmaster General and he and his immediate successors focused on a postal system that mainly carried military communications between the armies and the Congress.

Both Franklin and other men of foresight saw a need to enhance the role of the agency and before long the Post Office was routinely handling both military and civilian mail. The Postmaster General was given the authority to establish a line of posts, “with as many cross posts as he shall think fit.” These arcane words allowed the establishment of local post offices as our Nation expanded.

One of the challenges facing the early postmasters was the transportation of mail across vast areas of wilderness and the Post Office used a variety of tools to accomplish that task. Military convoys, horses, mules, dog sleds, rowboats, rafts, steamboats, stagecoaches, railcars and other devices were employed to move the mail. Innovation was important as new tools came on scene. For example, beginning in the 1830’s a stage coach contractor on a route from Philadelphia to Lancaster, Pennsylvania was granted a payment of $400 per year, for carrying the mail on THE RAILROAD as far west as Chester, PA.

Getting the mail as far as California became even more critical when
the Golden State became a part of the Union in 1850. The Post Office had been working on the challenge for several years and had established a goal of getting mail between the east and California in 4 weeks or less. Sailing vessels rounding Cape Horn at the tip of South America often took months more than the time allotted to deliver the mail.

The quickest way involved mail traveling by ship from the east coast to Panama where it was moved across the isthmus by canoes and mules and then it was shipped to California by boat. Even with the establishment of the Panama Railroad across the isthmus mail delivery was chancy and often exceeded the desired time!

Carrying the Nation’s mail by stagecoach was another tool tried by the Post Office and on July 9th, 1857, the San Antonio and San Diego Mail Line began operations. This route, disparagingly referred to as, “The Jackass Mail,” by disgruntled passengers because of the unpleasant and uncomfortable conditions on the 1457 mile journey that could easily take 57 days to complete. Part of the trip required that the passengers disembark from the stagecoach and ride mules for several dozen miles over very rough terrain, gaining it the nickname, Jackass Mail.

John Butterfield, an experienced stagecoach company owner, thought that he could do much better and he was awarded a contract to deliver mail between St. Louis, Missouri and San Francisco, California. There was a time consideration in the contract requiring that each trip be completed in 25 days. On September 16, 1858, Mr. Butterfield began the first east to west journey and it was completed in 23 days and 23 hours.

On board the stagecoach and accompanying the U.S. Mail on that very first trip was a New York Herald Newspaper reporter, Waterman L. Ormsby, who mentioned the Temecula area in his series of dispatches that were to appear in the paper. “Our road lay through some delightful oak groves- a most decided improvement on the desert- while the cool, delicious springs of water were most acceptable.” Ormsby went on to note that the accommodations at Temecula were excellent and the road there is lined with prosperous ranches.

Six months after the passage of the first Butterfield Stage through Temecula, U.S. President James Buchanan appointed Louis A. Rouen as the first Temecula Postmaster on April 22, 1859. Rouen served at the Magee store, near what is now Margarita Road and the Temecula Parkway (79 South). This was the first of the fourteen post office sites that have been used in the collection and distribution of Temecula’s mail; the post office location changed frequently during the ensuing decades. It was located in several places including private residences, the Wolf Store, the Machado Stores, the train station, the Palomar and the Temecula Hotels, Hall’s Café, Security Pacific Bank and the two sites operating today.

During its journey to and from Temecula, mail may have been in ships, planes, 18 wheelers, golf carts and many other conveyances including the last mule train delivery used in the United States. On the Havasupai Indian Reservation an eight mile long narrow path reaches 500+ tribal members who live at the bottom of the Grand Canyon and the mail service mules deliver everything from food to furniture and haul out mail and packages on this unique postal pathway.

Mail Service in Temecula has been a significant part of the culture and character for a century and a half. It is sometimes, little appreciated except by those who serve. Following September 11, 2001 the Postal Service ran a series of reminders in magazines, papers and on television that summarize what they do for the citizens of Temecula and our Nation.

“We are mothers and fathers. And sons and daughters who every day go about our lives with duty, honor and pride. And neither snow, nor rain, nor heat, nor gloom of night, nor winds of change, nor a nation challenged, will stay us from our appointed rounds. Ever.”